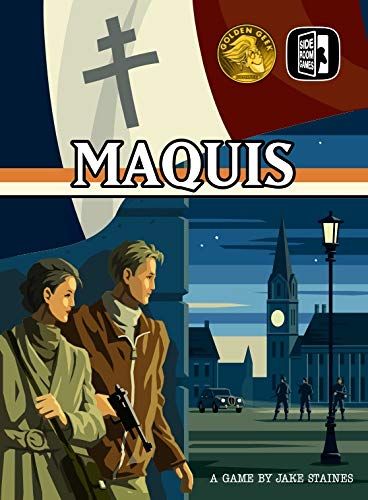 In case you haven’t heard this verbalized in the past couple months, allow me to say what everyone’s thinking: we live in straaange times.

As of writing and publishing this, the world is in the grips of a pandemic and it’s forced us to stay home, away from family and friends for an indefinite amount of time. It really sucks but when the alternative is literally dying it makes the sacrifice a little more worth it.

In the process of these stay at home orders across the globe, people in board gaming are starting to realize the wonders of solo gaming. Yes, games that can be played by yourself. Once the punchline of many a joke, solo games are now becoming salvation in these trying times.

I have been a self-proclaimed solo gamer for the past year or so. While I obviously much prefer playing games with actual people, I do enjoy pulling out solo games a couple times a week to help satisfy my cardboard cravings.

To celebrate the wonders of solo gaming, especially in this dark period in history, I am in the process of writing a Top 10 Solo Games for this site. Sadly, it’s taking me waaay longer than anticipated, mainly because I have so much trouble choosing between just 10. As I’ve written it, games have entered and left the list like Defense Against the Dark Arts professors and it’s resulted in a patchwork writing style in which half the entries are written and the other half are still in flux as I play and replay various games to decide if they earn top billing.

Maquis is a game that was on the list, and I even wrote a decent sized chunk about it, BUT it unfortunately got booted off by another game at the buzzer. I didn’t feel right doing Maquis dirty like that, so I decided to flesh out what I wrote and turn it into its own full-fledged review because that’s what this game deserves, dammit.

Maquis is designed by Jake Staines and published by Side Room Games. Side Room Games is interesting because they’re a small indie publisher that seems to primarily focus on solo games. They’ve had a handful of successful Kickstarters, perhaps their most famous and popular being the solo hidden movement game (yes, you read that right) Black Sonata. Unfortunately, I missed the boat on Black Sonata but I made sure to not make the same mistake with Maquis.

In Maquis, you are a member of the French Resistance in World War II, pushing back against your Nazi oppressors in occupied France. I really love this game’s theme not because its World War II but because of it’s take on World War II. So many WWII games are about combat and battling it out with a boots on the ground approach. Which makes sense; it’s a war after all. But it’s refreshing to see a game focus on the more human element of it, about average people completing clandestine tasks to win back their homeland from horrific oppressors.

As an American, I have no shortage of “Americans punching Nazis” pop cultural materials to enjoy, so I love when another country or culture is spotlighted. Being able to immerse myself in the French Resistance chapter of WWII’s vast textbook of events is interesting and enlightening. The game’s stark art style also helps add to the theme, as well as just making the game fantastic to look at.

Okay, so the theme and art are great. How does the game actually play?

Every game you’re given two random objectives and in order to win you need to complete them both before time runs out. These objectives vary wildly, involving tasks like blowing up a train or assassinating some officers or being a mischievous backstreet hooligan by placing graffiti tags around the city.

Seeing as Maquis is a worker placement game, it’s no surprise that the way in which you complete these objectives is by placing workers. On your turn, you’ll place a worker in one of the many spots around the city, gathering resources that will allow you to satisfy the different objectives. As you place workers, however, the enemy A.I. deck is placing patrols at certain locations as well.

These guys are assholes for a couple reasons, besides the obvious ‘they work for the Nazis’ ones. One: they block a spot that you might have needed. Two: they can potentially remove your workers from the game if all their targeted destinations are already occupied. Three (and this is the big one): they block the route back to your safehouse, endangering your workers from ever getting back into your possession.

That last one is a doozie and is what forms the crux of Maquis’ puzzle. Unlike most worker placement games, solo or otherwise, Maquis doesn’t allow you to immediately take the action or resource from a spot till the end of the round. The only way that occurs is if you’re able to find a route back to the safehouse from where your worker currently is. If all possible routes back home are blocked by enemy patrols, that worker doesn’t make it back and is removed from the game. To add insult to capture, many of the spots on the board don’t allow you to take its associated action/resource if this happens. While frustrating to deal with, this makes thematic sense. How could that gun make it back to the safehouse if the worker is captured?

(Unless, maybe, they launched it into the air towards the safehouse like a Doug Flutie Hail Mary, which certainly gives me ideas for the expansion.)

This important rule not only adds heaps of tension but also a spicy pinch of route building and push your luck to Maquis’ otherwise standard worker placement recipe. The first game of Maquis I ever played, I was treating it like any other run of the mill worker placement game. I put my workers on spots that had the resources I needed, assuming I’d be safe in getting them back to the safehouse. It’s only World War II, it can’t be THAT hard, right?

All of my workers were arrested and I quickly realized that I was going to have reprogram some of my old habits with worker placement games. Dotting your workers across the board like you’re sprinkling sugar on a Christmas cookie leaves them vulnerable. What Maquis trains you to do is to create chains of workers, like a line of ants snaking towards a picnic blanket. This makes it MUCH more likely that your workers will have a safe route home, safeguarding the resources you hope to acquire.

The problem, of course, is that linking your workers together is not always efficient. There are a couple of spots that don’t offer any action or maybe give a resource you have no need for. Placing workers there for the sake of building your chain can often seem like a waste, even if it is for the greater good. Time is short in Maquis, though, and there will be points where you must break a worker off on their own to get something you desperately need. Deciding when to take that calculated risk is when Maquis is at its most intense.

And intense is the word I’d choose to describe Maquis. From round 1 you can feel the threats of capture and running out of time breathing down your neck. I saw someone on Twitter mention that when they play Maquis, they find themselves flipping the cards faster, as if doing so buys their Resistance members more time to escape safely. I wholeheartedly agree with this and I have noticed myself doing the same thing.

This intensity is a double-edged sword, however, and one of the big reasons why Maquis ended up just missing out on a spot in my forthcoming top 10 solo games list. As I’ve played more and more solo games, I’ve realized that I gravitate towards games that are a little more relaxing and offer a difficulty that challenges me but is winnable more than half the time. I think it’s because if I’m solo gaming, I’m using it as a chance to settle down and relieve stress. Maquis does quite the opposite. A game of Maquis is 20 minutes of fist clenching, teeth gnashing intensity and it’s something I have to be in the mood for.

Of course, there’s nothing wrong with that and it’s purely a personal preference. And honestly, it’s good that this game is so tough and harrowing. If a game about trying to overthrow Nazis with nothing but grit and determination was easy and laid-back, that would be a huge thematic disconnect. This SHOULD be tough and it SHOULD tie my stomach into a Gordian Knot. It kind of reminds me of what I said in my last blog post when I briefly discussed the game Freedom: The Underground Railroad. That is also a game that handles a sensitive theme with grace and respect and involves a brutal difficulty that makes you appreciate just how difficult it was for good to eventually triumph over evil.

In the end, even if Maquis it is a little more nerve-wracking than my usual solo fare, I really do love this game. Its unique take on worker placement, by adding elements of route building and push your luck to the genre, combined with its cool theme and art, results in a game than any solo gamer should have in their collection.